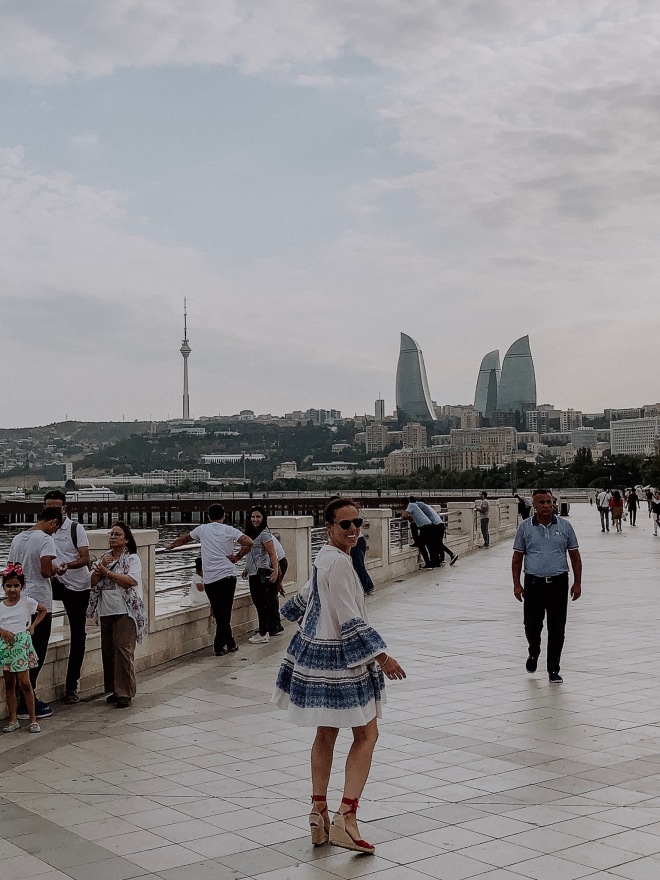 Azerbaijan: kite-surfing & sight-seeing in a place full of contradictions

“So what are your plans for the summer?” “Well, we are going to Azerbaijan.” Silence. Bewildered faces. I have to admit Azerbaijan does not sound like Greece, Italy, Spain or any other usual summer holiday destination. But believe me: it’s on the best way to become one.

The reason to travel to Azerbaijan was actually to visit my boyfriend’s friend, who runs a kite-surf school. Kite-surfing in Azerbaijan?! Some more strange looks. Yes, located near the capital Baku there is a peninsula that forms a lagoon with never-ending flat water and constant wind. The home of Blue Planet Kite Beach, the very first kite center and hotel in Azerbaijan. And our home for one week. Or better: the perfect escape program from the noises of hectic life back home. 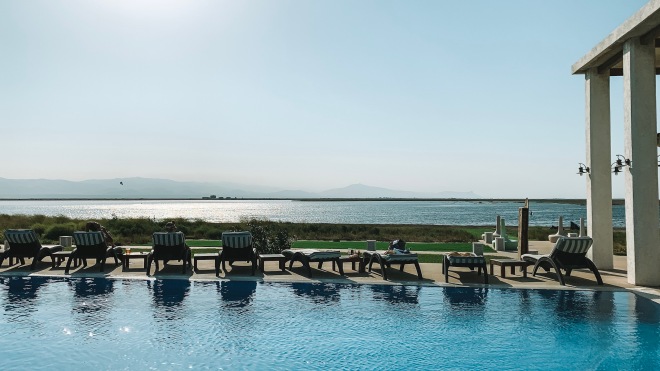 We stayed in one of the super spacious and comfortable rooms of the kite stations’s hotel with a magnificent view overlooking the lagoon and its’ uncountable birds flying their courses, located only 80 meters form the kite station. Every day started with a delicious and rich breakfast, followed by the first kite-surf session of the day. In between the sessions we had time to relax at the station’s pool and hotel bar, offering daily homemade and fresh meals and drinks. 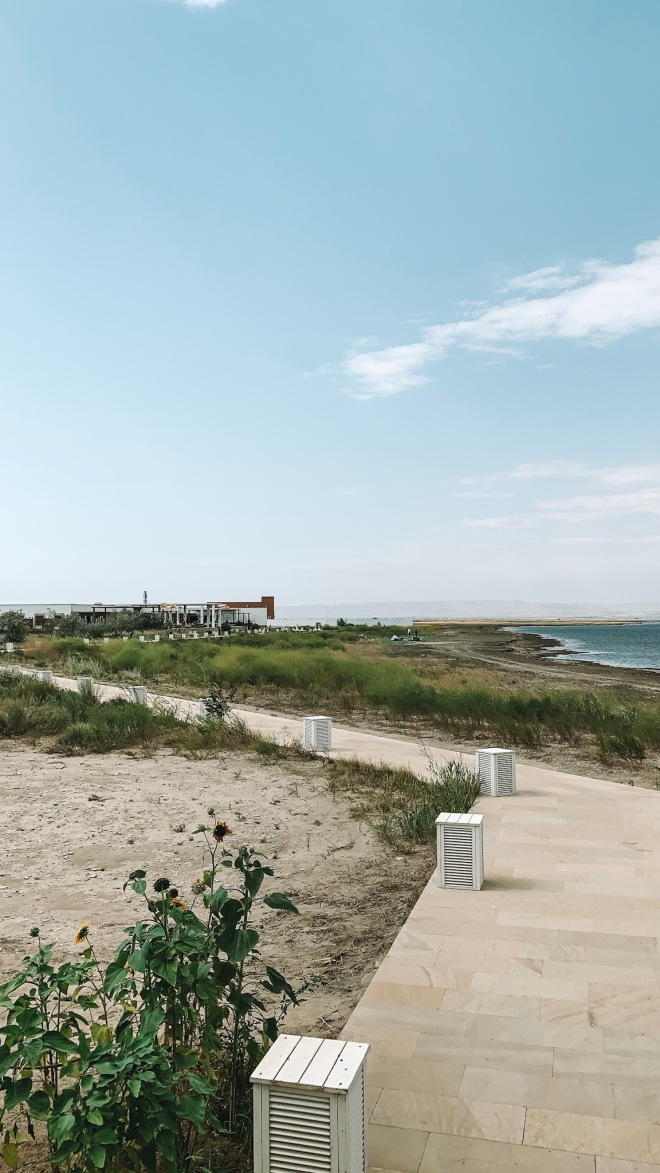 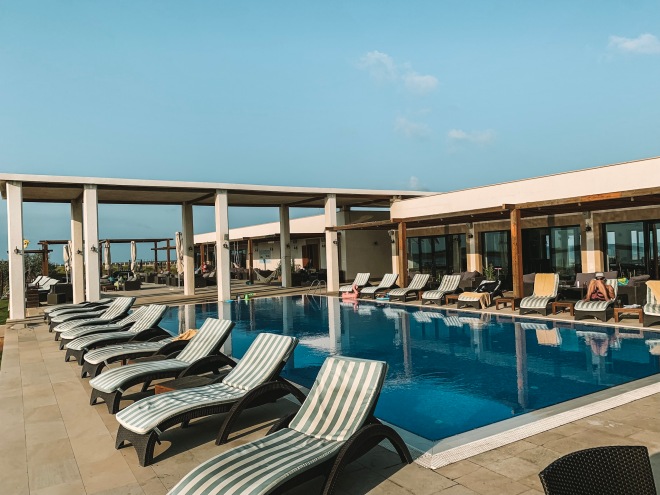 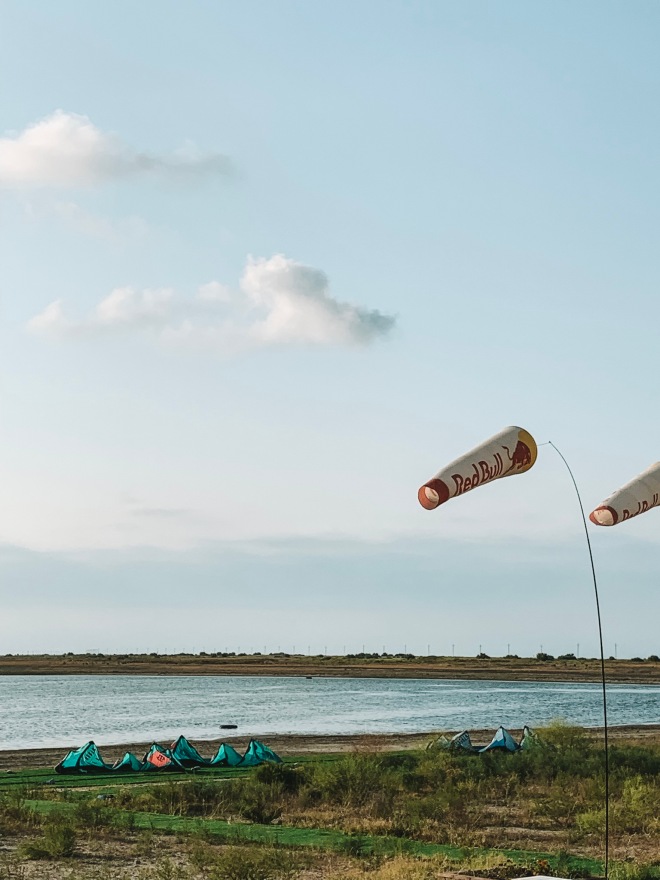 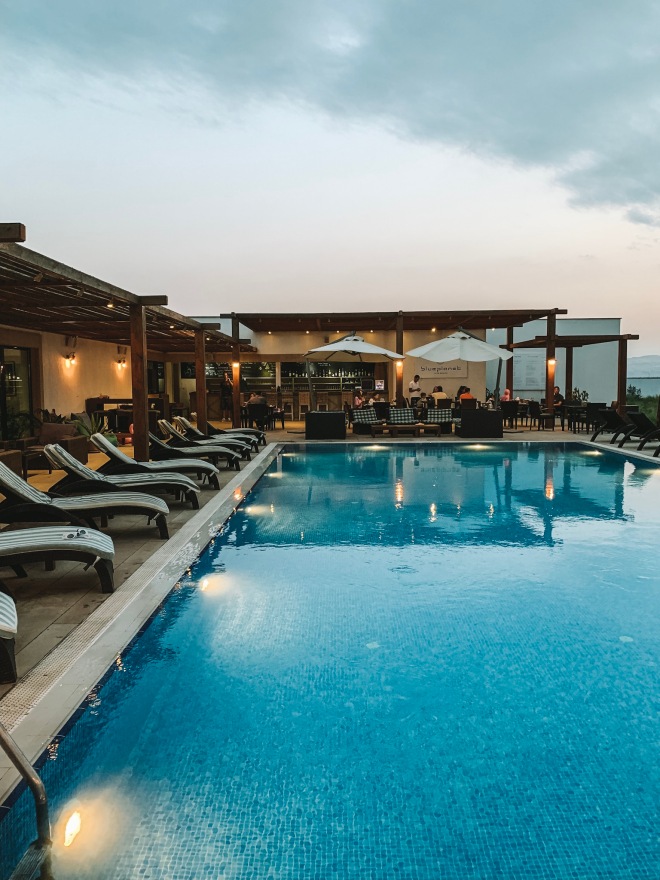 I basically grew up at the (Croatian) sea and water and wind were and still are important elements in my life. So I always wanted to learn how to kite-surf and last time I thought it’s the right time (in Cape Town, South Africa), I cut my finger so deep that I had to wear a cast and was not allowed to swim. After our arrival at the Blue Planet kite-surf station, I was introduced to my instructor Roma. Roma is Ukrainian and somehow knew exactly how to train and to motivate me as after the first session I thought I can not move my head and arms anymore. Friends, who kite-surf, told me how super hard and exhausting it is to learn this sport. But, being totally honest, I could have never imagined that it’s going to be that hard. Although the conditions were just perfect. However, reaching my limits a couple of times Roma did not accept to stop practicing for the day or rather quitting and assured me “it’s good, when you are tired, then you don’t fight with the kite.” With this attitude he made me kite-surf, believe it or not, the third day. I can still feel my endorphins and pride today and actually can’t wait to stand on the board again. 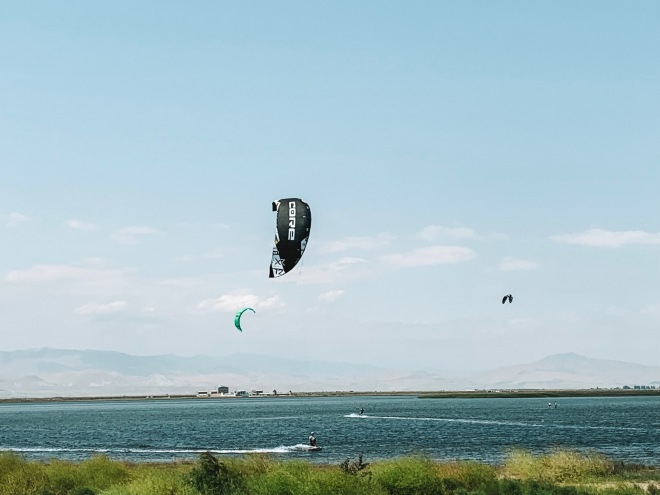 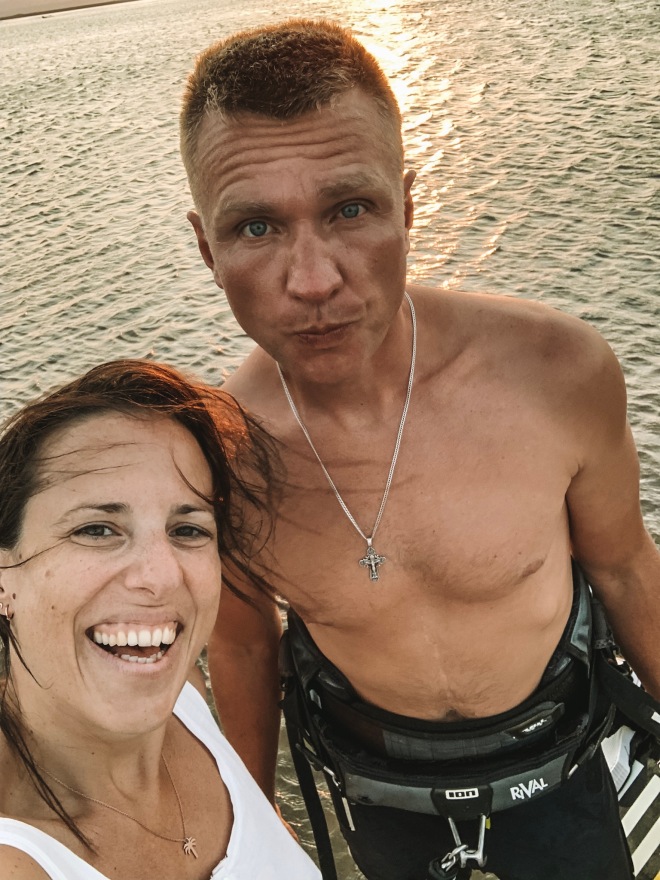 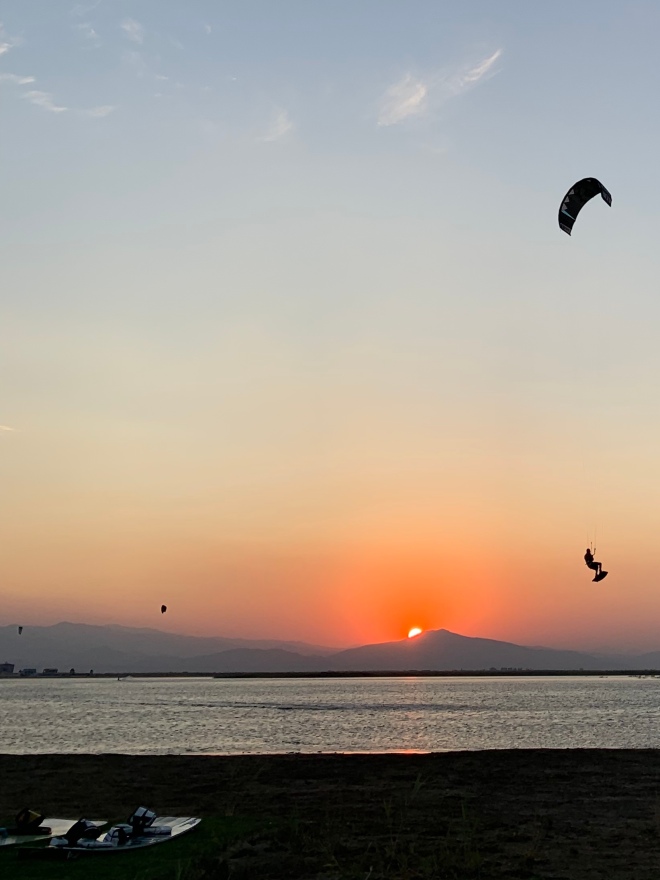 It does not happen that often but if the wind decides not to blow you can take this opportunity and drive to Baku. The Azeri capital is many things at a time. It’s undoubtedly European, but it also has a long history with the Middle East. It’s an ancient city, but you can also clearly see the modern side of Azerbaijan as an oil-rich country. You can really feel the Russian and Turkish influences here, including the heavy bargaining at the bazars. The best places to visit in Baku reflect this lovely and complex feel.

In only a couple of hours we visited:

The Baku Boulevard, created over a century ago, offers locals and visitors a chance to connect with the sea. This beautiful boardwalk covers around 26 km of the city’s coastline. The promenade offers amazing views of the city. 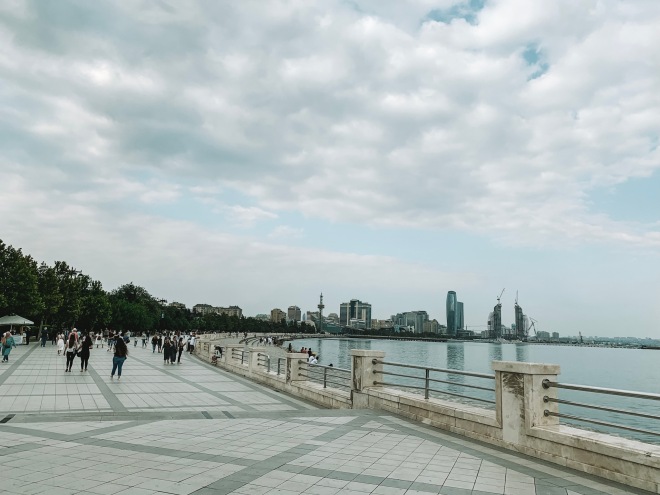 Baku’s old town and its historical core is a walled city dating back to at least the 12th century. The area includes breathtaking buildings from past centuries, including the Maiden Tower and the Palace of the Shirvanshahs. The 11th and 12th century Baku fortress Wall is another unmissable spot of this Baku travel guide. 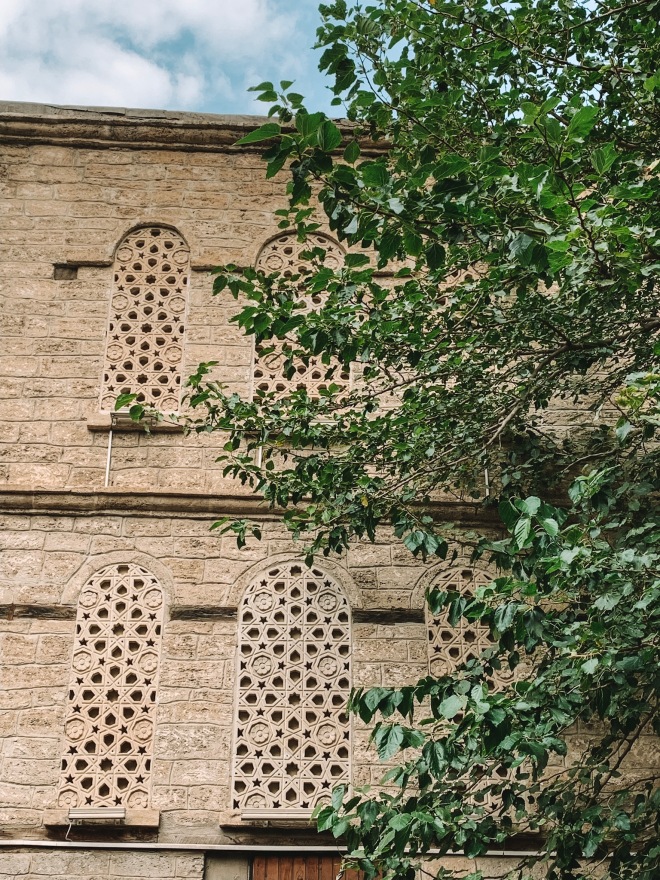 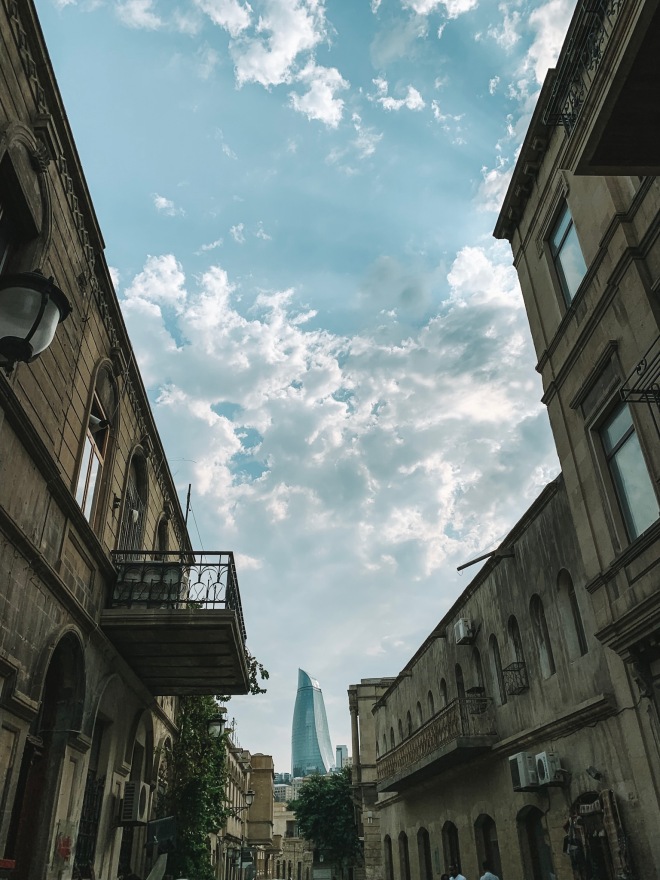 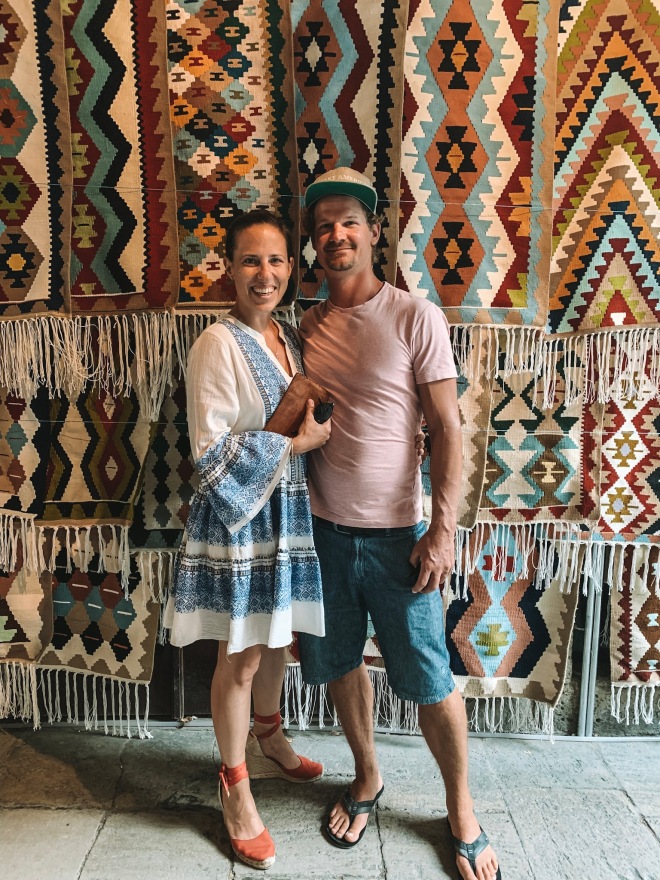 If the view of the Caspian Sea from below isn’t enough to entrance you, the Baku funicular certainly will. 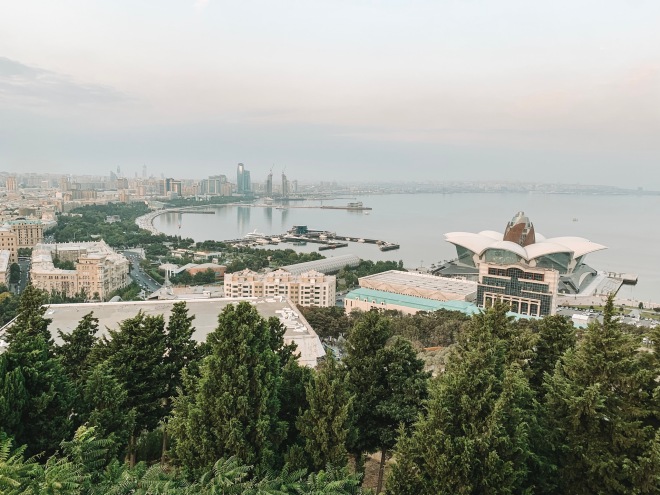 Food is a key part of socialization in Azerbaijan, with deep significance in local tradition. A lot of the local flavors revolve around meats (lots of lamb, for example) and soups of different kinds. The most popular dish in Azerbaijan might just be plov and its variations, namely rice cooked in broth. We had an unforgettable mixed meat kebab dinner at RESTORAN ISTIRAHET. 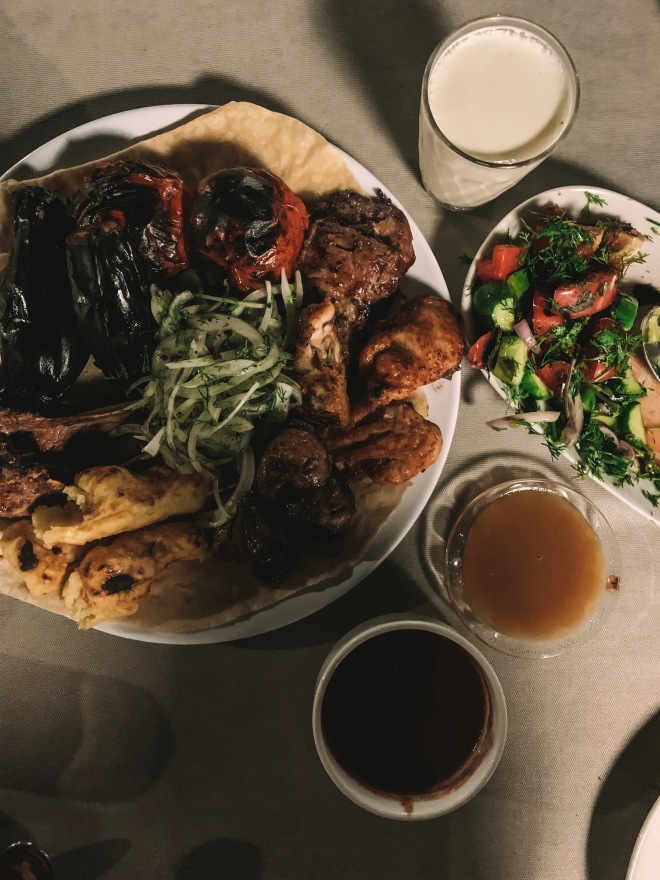 There are of course so many other highly interesting things to see and famous museums to visit as Baku is rapidly transforming its skyline with some of the world’s most spectacular new architecture. You can definitely plan and easily spend two more days in the capital. 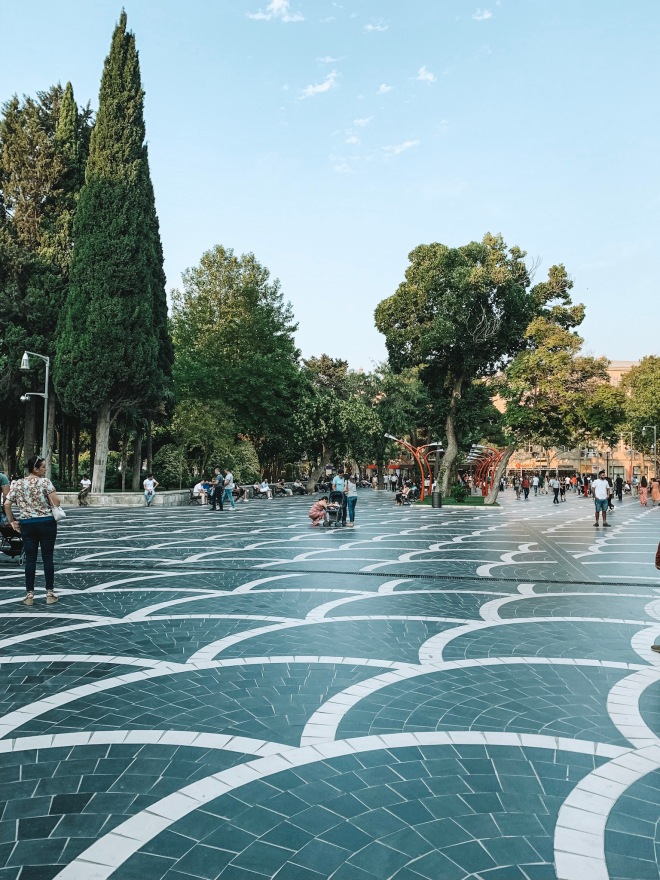 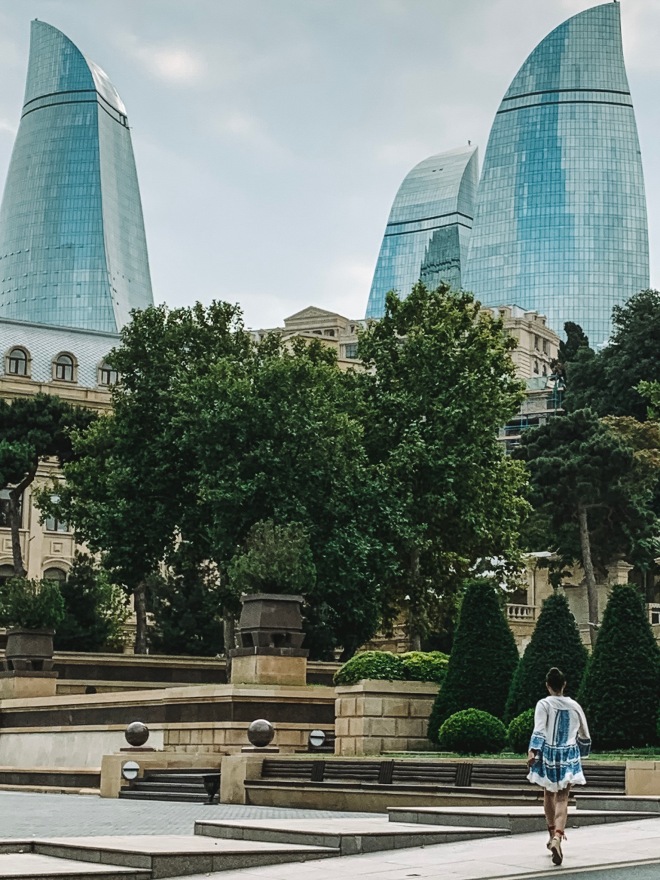 The dress I am wearing was the prototype for the Croatian embroidered “Mira” collection.

Due to the new delivery of Suzani Vests that I shared recently in my stories, I’ve been asked several times about the origin of the shearling fur. I am happy to share more details here: the sheep suede for the vests is ethically sourced in the northern mountain part of Afghanistan (Pamir) bordering China and is a biodegradable by-product of the local meat industry. The sheeps roam free every day, grazing upon miles of mountainous grassy hills. Eventually, the animals are used for the local meat industry and their wool is used to make warm winter coats such as those that Afghan locals have been wearing for thousands of years. I do my best to only use natural sustainable, biodegradable materials that leave a minimal trace in our environment. I believe in a conscious, conservative approach to consumption and want our pieces to be kept for years to come. The new collection is available in my concept store and will be uploaded in the online-shop this week! Should you have more questions about my products and the materials we use, don’t hesitate to contact me! #newin #suzanivests #suzani #traditional #afghan #embroidery #heritage #history #handmade #handicraft #silviagattin #shearlingvest #winteroutfit #bohostyle #bohochic #ethnostyle #ethno #slowfashion #upcyclingfashion #sustainablefashion
Another perfect match I am in love with: my Kilim Boots Abdillah and handcrafted @lieblingsstueckerl earrings. A new selection of unique pieces, brand new with delicate wood carvings, is now available at my concept store! #newin #kilimboots #abdillahboots #silviagattin #silviagattinboots #lieblingsstückerl #ohrringe #earrings #handmade #unique #oneofakind #conceptstore #hollandstrasse9 #slowfashion #sustainablefashion
Paris exists to remind you that your dreams are real • #alwaysandforever #paris #merci @yamyam_event_production @maisonetobjet @lesbainsparis • Watch out for the travel blog post and all the new ideas, projects and products that will follow • #silviagattin #wherefashionandinteriormeettravel #onlineshop #conceptstore #slowfashion #sustainableliving #handicraft
Morocco meets Afghanistan • Century old handicraft traditions meet modern yet timeless lifestyle • Winter, we can deal with you 😎 Some handmade unique shearling coats and Suzani vests (more are coming very very soon) and the new Kilim Boots Abdillah delivery are available online on www.silviagattin.com and in store. #winteressentials #shearlingcoat #embroidery #handmade #slowfashion #sustainablefashion #kilimboots #kilimbootsabdillah #silviagattinboots #silviagattin #kelimboots #kelimstiefel #kilimstiefel #igersvienna #conceptstore #onlineshop #wherefashionmeetstravel
So this is what I call a PERFECT MATCH 🖤 My Kilim Boots Abdillah accompanying @lenahoschek ‘s models showing her new autumn/winter 20/21 collection at @mbfw.berlin yesterday. I can’t put into words how happy I am about this symbiosis.. New Kilim Boots, by the way, are available again online on www.silviagattin.com (link in bio) and in store. Please note that the concept store is closed this Saturday, January 18! #backinstock #kilimboots #silviagattin #lenahoschek #fashionweek #fashionweekberlin 📸 by Andrea Adriani for VOGUE.DE
Now that I turned one year older (thank you once again for all your lovely messages from near and far) and in general the past years I have the feeling I have to learn to deeply surrender. I am a Capricorn and Capricorns tend to be little control freaks. Only when you surrender and have faith in the universe’s plans you make space for all kinds of wonders. It’s the same with my KILIM BOOTS ABDILLAH. There is no control over the kilim’s patterns, colours and fabric designs and still every delivery is a full surprise of unique boots that make already hundreds of women feeling one of a kind and simply cool! I would love to choose every kilim by myself, but then the surprise would not be that big when I open the boxes of the new deliveries. Ladies, I can assure you - the new models, available from now on online and in store, are again amazing and perfectly match a new collection I am very excited to share more about tomorrow.. 🖤 #backinstock #kilimboots #silviagattin #hollandstrasse9 #onlineshop #thankyou #fashionweek #mbfw #mbfwberlin

silviagattin's blog brings you closer to the world’s most exclusive destinations and the collections' behind-the-scene
Follow silvia gattin's behind the scenes blog on WordPress.com
%d bloggers like this: